Katherine Hepburn famously said of her slim physique: “What you see before you is the result of a lifetime of chocolate.” New evidence suggests she may have been right.

Beatrice Golomb, and colleagues present new findings that may overturn the major objection to regular chocolate consumption: that it makes people fat. The study, showing that adults who eat chocolate on a regular basis are actually thinner that those who don’t, will be published in the Archives of Internal Medicine.

The authors dared to hypothesize that modest, regular chocolate consumption might be calorie-neutral –in other words, that the metabolic benefits of eating modest amounts of chocolate might lead to reduced fat deposition per calorie and approximately offset the added calories (thus rendering frequent, though modest, chocolate consumption neutral with regard to weight). To assess this hypothesis, the researchers examined dietary and other information provided by approximately 1000 adult men and women from San Diego, for whom weight and height had been measured.

The UC San Diego findings were even more favorable than the researchers conjectured. They found that adults who ate chocolate on more days a week were actually thinner – i.e. had a lower body mass index – than those who ate chocolate less often. The size of the effect was modest but the effect was “significant” –larger than could be explained by chance. This was despite the fact that those who ate chocolate more often did not eat fewer calories (they ate more), nor did they exercise more. Indeed, no differences in behaviors were identified that might explain the finding as a difference in calories taken in versus calories expended.

“Our findings appear to add to a body of information suggesting that the composition of calories, not just the number of them, matters for determining their ultimate impact on weight,” said Golomb. “In the case of chocolate, this is good news –both for those who have a regular chocolate habit, and those who may wish to start one.” 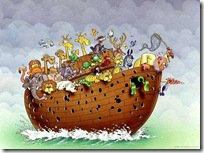 A bit of humour mixed with spirituality

Everything I need to know about life, I learned from Noah and his Ark

Oh, and be careful of Woodpeckers.

As opposed to the 12-Steps to recovery here is the suggested program to insanity or have a laugh at ones former self behaviour.

The Washington Post publishes a yearly contest in which readers are asked to supply alternate meanings for various words. These are some of the winners:

The 12 Steps to Insanity

Always do sober what you said you’d do drunk.  That will teach you to keep your mouth shut. -Ernest Hemingway

A hangover is the wrath of grapes.  -Author Unknown

The first thing in the human personality that dissolves in alcohol is dignity.  -Author Unknown

When the wine goes in, strange things come out.  -Johann Christoph Friedrich von Schiller, The Piccolomini, 1799

O God, that men should put an enemy in their mouths to steal away their brains! that we should, with joy, pleasance, revel, and applause, transform ourselves into beasts!  -William Shakespeare, Othello

When the wine is in, the wit is out.  -Proverb

Drunkenness is temporary suicide.  -Bertrand Russell, The Conquest of Happiness

Drunkenness is nothing but voluntary madness.  -Seneca

How come if alcohol kills millions of brain cells, it never killed the ones that make me want to drink?  -Author Unknown

Due to increasing products liability litigation, all liquor manufacturers have accepted the suggestion that the following warning labels be placed immediately on all varieties of alcohol containers: